"Perennial" follows a trans woman confronted with how others perceive her womanhood as she helps a pre-teen girl navigate her first period.

Read more
17
Backers
$905
Raised of $8,000 goal
0
Seconds left
Tweet
"Perennial" follows a trans woman confronted with how others perceive her womanhood as she helps a pre-teen girl navigate her first period.

The film follows a young trans woman who is confronted with how others perceive her womanhood as she helps a pre-teen girl navigate her first period. The film is exploring the central theme that until we let go of the fantasy of who we want to be, we can never be loved for who we are.

The film is inspired by Griffin's own experiences as a trans woman. Specifically, she drew on her anxiety about her younger sisters approaching puberty. She fears that she won't be able to offer them the guidance they need in "becoming women" and she fears they may stop seeing her as one.

If you're interested in seeing more about the visuals, references, and inspiration for the film, you can check out our pitch deck HERE. 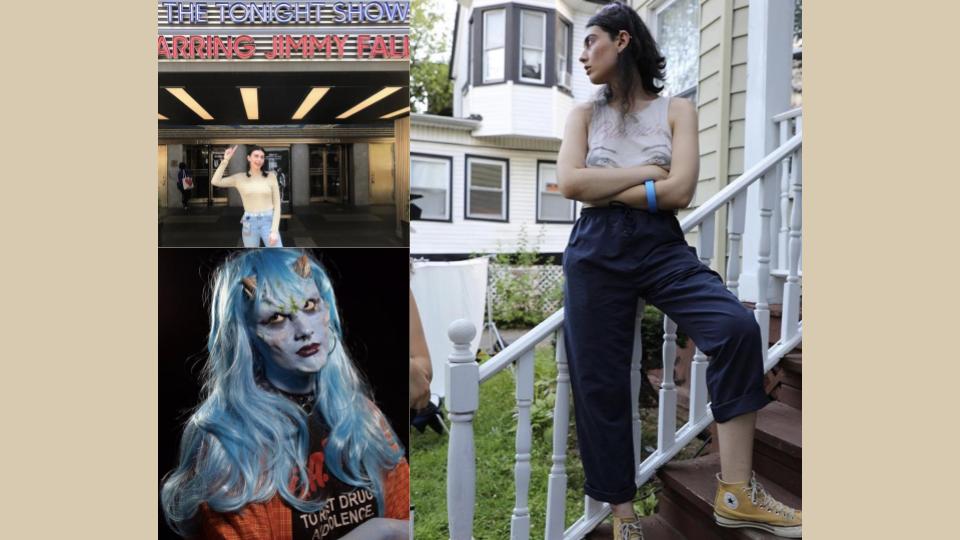 Griffin is a Queens based filmmaker in her senior year at NYU Tisch. While her focus is on writing and directing, she also works as a production designer helping bring other director’s visions to life. In her own work, Griffin explores stories of identity, drawing inspiration from her upbringing as an Orthodox Jew and her experience as a latina trans woman.

Outside of her work on set, Griffin has completed internships at The Tonight Show Starring Jimmy Fallon and American Documentary’s America ReFramed. She is also a guitarist for the Brooklyn based Queercore band, eCOCOBOYS. 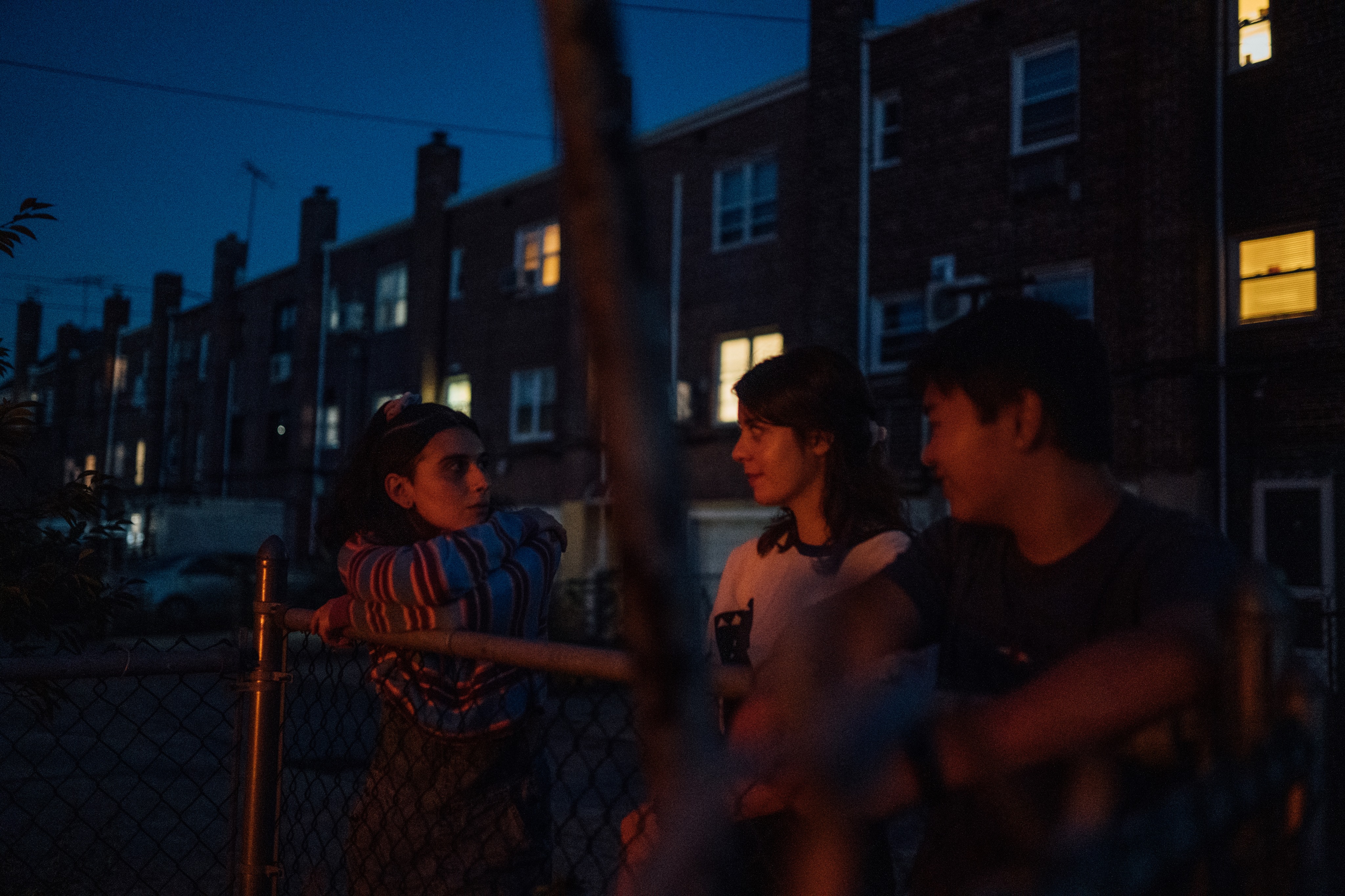 We've put together a crew of really passionate young filmmakers who support this story and Griffin's work. We're proud to say that the crew is made up entirely of women and non-binary identifying people. Here's a little bit about our key crew members! 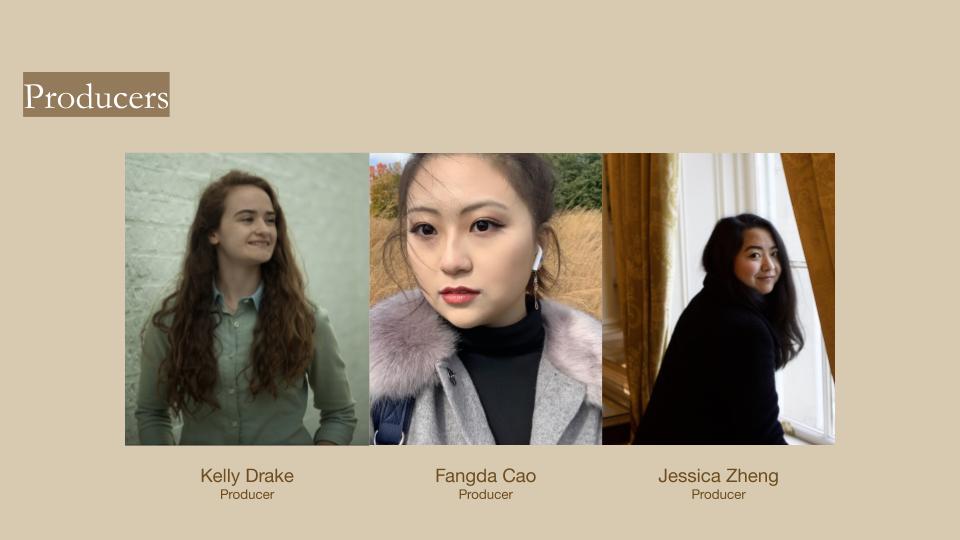 Our producing team is made up of Fangda Cao, Kelly Drake, and Jessica Zheng.

Fangda is a junior at NYU Tisch studying Film and Television with a minor in Business of Entertainment, Media and Technology at the Stern School of Business. After building her academic foundation in film production at NYU Tisch for two years, she is drawn to independent producing where innovating ideas can be found and invested. As a rising producer, she has produced multiple short films working with NYU, Columbia University and University of Southern California film program alumni. She also worked as a Production Intern at Big Indie Pictures, founded by producer Declan Baldwin.

Kelly is a junior studying Media, Culture, and Communications at NYU Steinhardt, with two minors - Producing in Tisch and American Sign Language in Steinhardt. She currently is the executive producer of a weekly radio drama podcast. In the past year, she has assistant directed on multiple music videos, short films, and feature trailers, as well as producing on multiple music videos and short films.

Jessica is a senior majoring in Film & TV at NYU, with minors in Business in Entertainment, Media & Technology and Art History. She’s helped produce numerous other shorts during her time at NYU, and outside of that you’ll find her working in the camera department. Previously, she's interned at Acres NY and Alex Gibney's Jigsaw Productions. Now, she's working as a production intern at The Tonight Show Starring Jimmy Fallon, and looking to pursue a professional career in producing. She’s stoked to be working on this new project! 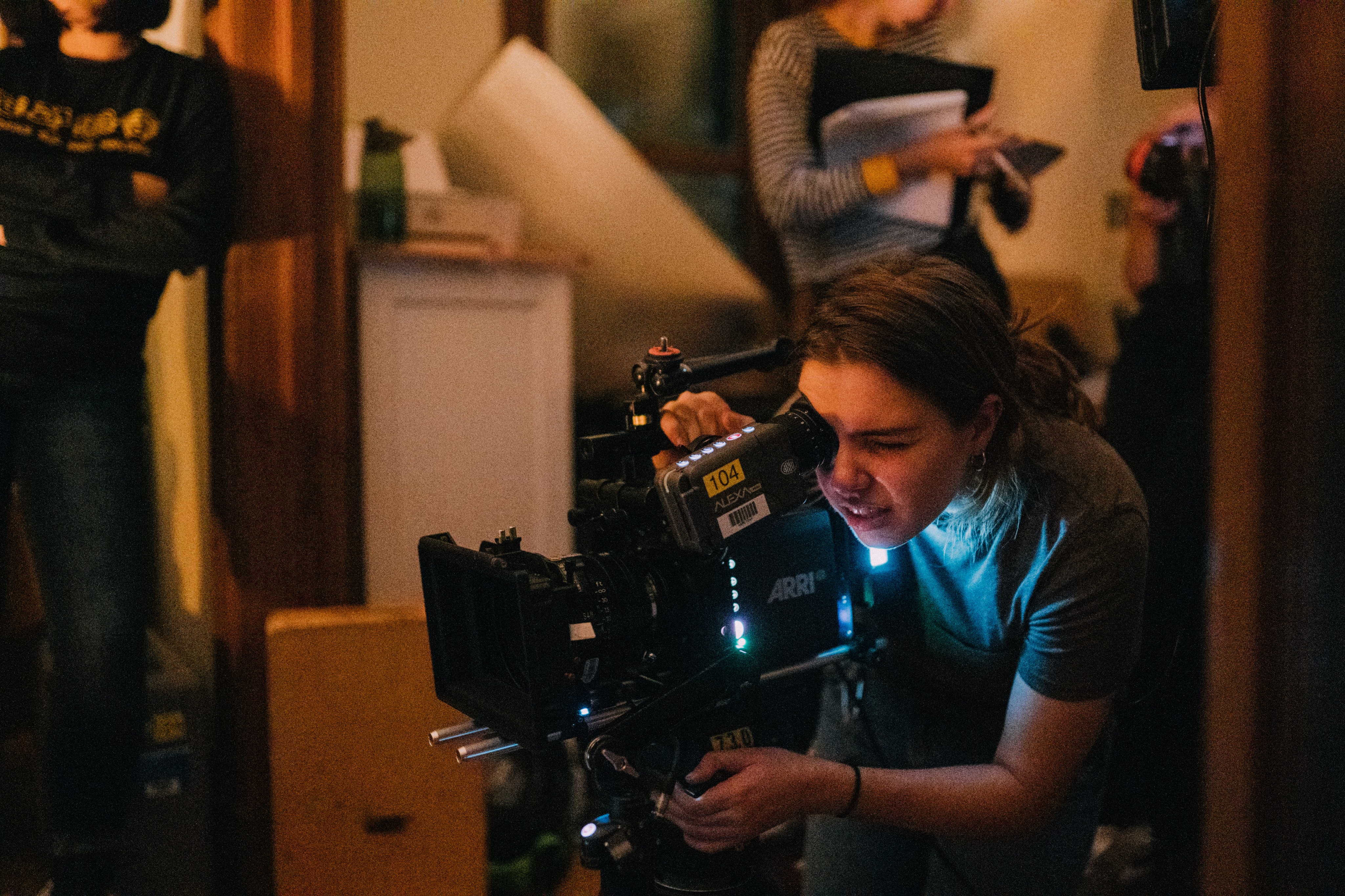 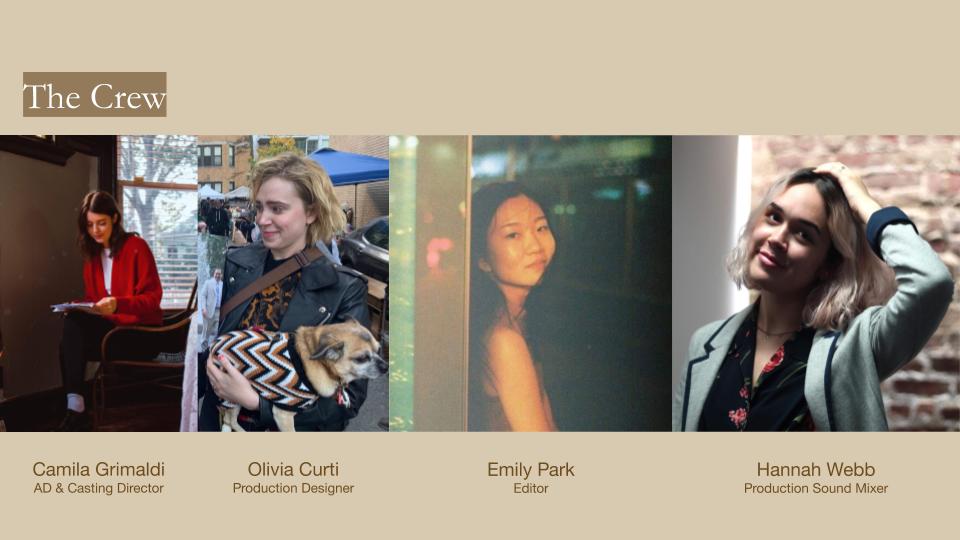 Camila Grimaldi is a senior in the NYU Film & TV department. She has worked as AD on five advanced films, and is so excited to be a part of the Perennial team! Outside of student films, she has freelanced on various professional projects, including short form documentaries and music videos. She currently works as a production assistant at Walter Pictures. Camila and Griffin have been collaborating since their freshmen year sound class.

Olivia Curti is a recent graduate from the NYU Film and TV department. Although her professional focus has shifted away from the film industry, she has been involved with the project from its inception and wants to bring her expertise to breathe life into the world. While in school, Olivia focused on costume design, special effects makeup, and production design. She has collaborated with Griffin on numerous sets, including Griffin’s previous film “Goyishe,” where she served as costume designer.

Hannah Webb is a senior in the NYU Film and TV department. She has had a passion for sound mixing since discovering it in her high school theatre, in addition to her interest in writing and documentary filmmaking. She strives to be a part of telling the stories we haven’t yet had the chance to hear. Hannah and Griffin have collaborated on numerous sets, including Griffin’s previous film, “Goyishe,” where she served as sound mixer.

Emily Park is a recent graduate from the NYU Film and TV department, and is currently working as an assistant editor on a PBS documentary series. While in school, she developed her passion in directing and editing, cutting projects ranging from narrative, doc, and music videos. Emily and Griffin met in their intermediate narrative class, Griffin serving as wardrobe supervisor for Emily’s project and Emily working as 2nd AC and editor for Griffin’s intermediate “Goyishe.”

While this is an incredibly talented team, we can't bring this film to life without your support. Our total anticipated budget is $20,000 dollars. Through NYU we've already secured the majority of our camera, lighting, and sound equipment as well as $1,300 in funding. $5,000 is set aside for post-production and will be secured through finishing grants after production. This leaves a remaining $13,700 to fundraise. Through family support and grants we anticipate raising $5,700. This leaves $8,000 to crowdfund and every contribution helps! 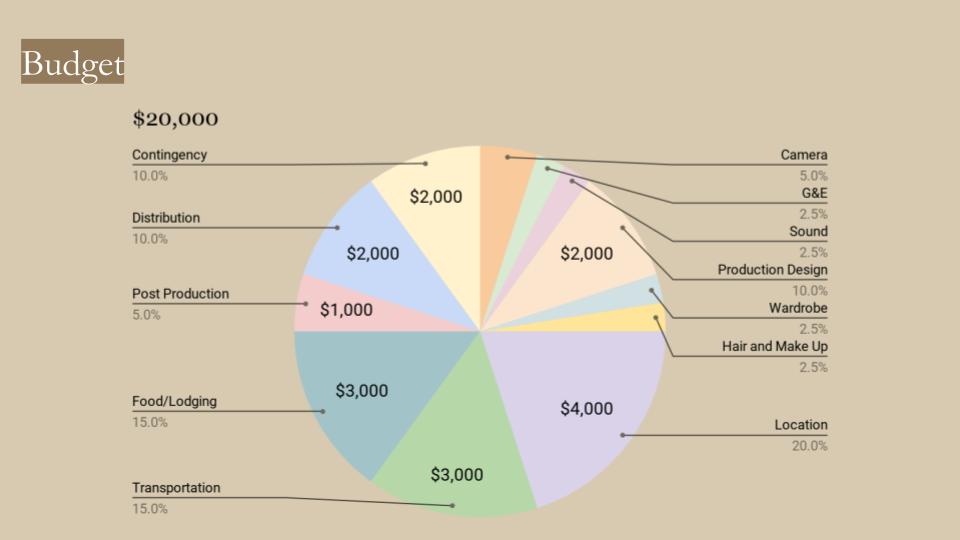 Here's a little breakdown of where your money will be going!

Camera, Grip, & Electric: $1,500. This enables us to rent additional camera lenses and lights to establish a strong visual language that further conveys the tone of the film.

Production Design: $2,000. This is a crucial department! Production Design is almost everything you see on the screen: the set decorations, the furniture, the props. This budget will allow us to create unique spaces that feel alive and add to our understanding of the characters.

Sound: $500. While the NYU sound allotment is substantial. This budget will allow us to rent additional lavaliere microphones, purchase batteries to power the sound mixer, and purchase additional memory cards as needed.

Wardrobe: $500. The film takes place over two days which means two outfits for our main characters. This money enables us to purchase key wardrobe elements that help identify who the characters are.

Hair and Make Up: $500. Make up plays a key role in this film. For June make up is a sort of armor to guard herself from the criticism of the outside world. Our make up artist will also be responsible for creating the look of the period blood.

Transportation: $3,000. We will need to rent a cargo van in order to transport all of our equipment and art. This budget allots for the week long cargo van rental, parking, and an additional budget for Ubers in case producers need to complete runs while on set

Food: $3,000. This will cover craft services and 1 meal a day for our 5 shooting days. We're committed to being as environmentally conscious as possible and plan on having an entirely plant-based set.

Post Production: $1,000. This is a small budget in order to cover the cost of having the film color corrected and sound designed. It also allots a budget in case an ADR studio is needed.

Distribution: $2,000. This budget will cover festival submission fees and travel costs so that the filmmaker can attend the festivals and discuss the project with a wider audience.

Contingency: $2,000. A 10% contingency to account for any overages or emergencies that may arise. This ranges from props not shipping in time, to equipment being damaged. Whatever remains after production will be rolled into the post-production and distribution budget.

Thank you so much for your interest in our project, it means the world to our team. In speaking about LGBT identity, we often discuss "chosen family." This film is exploring "chosen family" as an extension of sisterhood. We're immensely proud of the family that we've put together and the support we've received thus far. We hope that you'll join us and help bring this project to life. Every contribution helps!