SPEED QUEEN uncovers deep truths about the moments that define us, the women who shape us, and the ache of love that can last a lifetime.

Read more
11
Backers
$1,925
Raised of $25,000 goal
0
Seconds left
Tweet
SPEED QUEEN uncovers deep truths about the moments that define us, the women who shape us, and the ache of love that can last a lifetime.

SPEED QUEEN: The Joe Carstairs Story is an ambitious musical conceived to honor one of the most courageous foremothers in the struggle for gay liberation and transgender equality. The Gay Pride of Marion Barbara 'Joe' Carstairs (1900 – 1993) and her refusal to hide her true identity as a transgender person has resonated with Phoebe Legere. 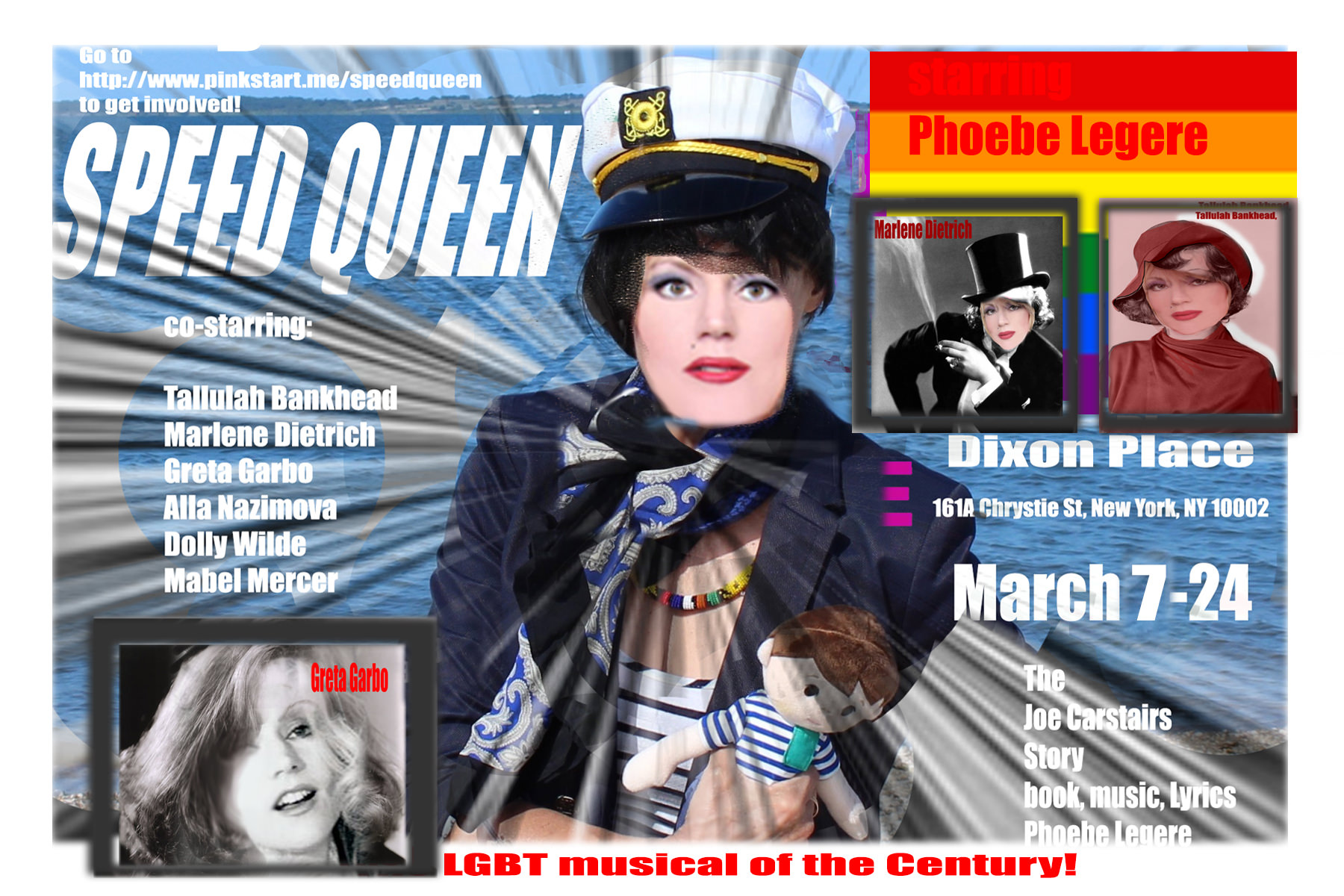 PHOEBE LEGERE STARS in her first cross-dressing role. In addition to the lead role of 'Joe" Carstairs, Legere will play many of Carstair's movie star lesbian lovers including Tallulah Bankhead, Marlene Dietrich, Garbo and Mabel Mercer. This will be a style fest for gay people of every stripe. Joe Carstairs was a natty dresser. Her suits were made by her tailor in Saville Row. She even dressed her doll, Lord Tod Wadley, in impeccable, Saville Row yachting attire.

Legere's male costumes have been made by Ralph Lauren.

Her period movie star costumes of the 20's, 30's and 40's are inspired by the Golden Age of Hollywood glamor: Adrian, Edith Head, Travis Banton....

In 1931, there was a sudden change in the public attitude toward gay women. Joe was criticized for her masculine attire and mannerisms. The European press condemned the“Cult of the Clitoris.” Joe set sail across the Atlantic to create her own Lesbian Paradise in the Bahamas: Whale Cay.

Joe redefined herself, again and again, refusing to look back, always triumphing as the captain of her own destiny. The story of Joe Carstairs unfolds in three acts: from Joe’s experiences as a young ambulance driver in World War l; to the ecstasy, pain, and beauty of making lesbian love to fabulous gay starlets; to her years as, “the Fastest Woman on Water”  when Joe held the world speed record for motorboat racing. In the final chapter, Joe Carstairs sailed away from the glare of publicity and became the King of her own, private, Lesbian Island.

Speed Queen is an exploration of the true life story of a courageous, historical lesbian. It is a sensual, intoxicating LGBTQ play that uncovers deep truths about the moments that define us, the women who shape us, and the ache of love that can last a lifetime.

This is an evening-length play that will include: multi-media, songs, dances, and portrayals of Joe’s lesbian lovers: Marlene Dietrich, Tallulah Bankhead, Greta Garbo, Mabel Mercer, Billy Holiday and Dolly Wilde. At the center of the story is the inspiring, inimitable Gay-Pride pioneer Joe Carstairs.